Since the turn of the century, an earthquake has happened

Since the turn of the century, an earthquake has happened – is happening – which we pretend is normal but which is radically re-shaping the landscape around us. Collectively we have experienced 9/11, major wars, civil wars in big Arab states, the growing nihilism of religious violence, a global refugee crisis, developing climate change, a severe banking collapse which revealed deep and endemic flaws in the global economy, an era of austerity and lengthening inequality and the re-emergence of demagoguery and extremist politics.
These things have taken place against the panoramic scenery of a digital revolution which we imagine has taken place but which is presently no more than the slow taxiing of a plane to the runway. In the course of this century, which will belong to our children and grandchildren, they will travel to places so far away we could never imagine them. The revolution in personal communication will alter the social architecture irrevocably, impacting upon lives more intimately than anything that has gone before. It is the biggest social experiment in human history.

Dazzled? Excited? Confused? Afraid? Perhaps a bit of each?

This website is a response to these changes. I am a Christian, living just outside London, trying to make sense of what is going on. Using the ancient and tested wisdom of the faith I share with millions, these writings feel like an attempt to put some of the pieces of an enormous jigsaw together that presently looks like a big, unconnected mess. But we won’t be deterred in trying to build a picture of the kingdom of God in a fractured world.

If what I say brings someone a bit closer to the love of God in Jesus Christ or a bit deeper into how to live for him as an imaginative and faithful follower, it will be worth it. And even if it doesn’t, I’m still enjoying developing this site.

Most of us want to do the right thing with our lives, but how do we cope with the complex demands of modern life?

This website expresses a deep yearning of mine: to take the beautiful message of the Gospel about Jesus and see how it applies to our culture.

I shall shortly be approaching the half-way stage in my sabbatical. It is time to share some observations.
After the busyness of Easter I felt it important to spend some days away from home to mark an immediate break from the routine of work

Deep in the winter of 1980/1 I had a spiritual awakening which altered the course of my life. I had believed in God, but it was at this time I became convinced of my need to follow Jesus seriously. 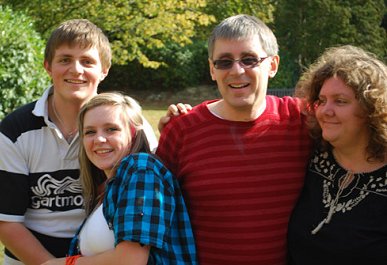 A bit about me.

I married Julia in 1989 and we have two children in Tim and Helena who helpfully interpret the Millennial generation for someone who grew to adulthood in the eighties. They live, study and work between them in London, which costs them – and us – an arm and a leg. Julia is a specialist in dementia care and is so unassuming in her gifting it is ridiculous.

I have served the Church of England since 1993, been vicar of two churches near London and am currently Archdeacon of Rochester and one of Rochester Cathedral’s clergy.

I follow lots of sports – football, cricket and rugby especially – and greedily support three teams. Fleetwood, Blackpool and Liverpool, if you’re asking. So as you see, I really do have a theology of suffering.

I still mourn the end of TV’s The West Wing and wish I could have worked in the Bartlet administration. Or at least have every conversation of mine scripted by Aaron Sorkin.

I have spent far too much of my life watching The Simpsons. This has given me an inexhaustible repertoire of jokes.

My only real achievement in life was to get a quote in an all-time book of cricket quotations.

Some people say I have a nice voice, which is their polite way of saying a have a face for the radio. As you can see.

Life and death in the world city. Over one third of Londoners were born abroad, with half arriving since the millennium. This work explores the new London: an immigrant city. In Judah’s eyes a transformed capital, for better and for worse.- Read More

The Tipping Point: How Little Things Can Make a Big Difference is the debut book by Malcolm Gladwell, first published by Little Brown in 2000. Gladwell defines a tipping point as "the moment of critical mass, the threshold, the boiling point".- Read More

Dr Mary Aiken is the world’s leading expert in forensic cyberpsychology—a discipline that combines psychology, criminology, and technology to investigate the intersection where technology and human behaviour meet.

Andy, Dag and Claire have been handed a society beyond their means. Twentysomethings, brought up with divorce, Watergate and Three Mile Island, and scarred by the 80s fallout of yuppies, recession, crack and Ronald Reagan, they represent the new generation- Generation X.