As we approach the end of 2015, we have much for which we are thankful and can see many answers to prayer in family life.

Though her health is still fragile, Helena is doing well. In September she started a degree at Roehampton University in Drama, Theatre and Performance. The course is stimulating and she is enjoying living in Clapham (though not the ridiculous cost of renting a room in London!) She is continuing to work at the Royal Haymarket Theatre where she has met an astonishing array of internationally acclaimed actors, including being photographed with Patrick Stewart and Chris Hemsworth. Helena’s boyfriend Jamie has started a degree in Creative Musicianship at BIMM London and is enjoying the challenge; he also works part-time at the Royal Haymarket.


Tim has been enjoying his Internship with the Near Neighbours charity, which fosters good inter-faith relationships between Christians, Jews and Muslims in parts of the country which especially need them. At the beginning of December 2015, he was successful in an interview to become Fundraising and Communications Officer for the Church Urban Fund, a role he will commence in January 2016. On the first day of an enjoyable July fortnight for Simon and Julia in Perpignan, Tim phoned to say he had proposed to Aislinn and she had accepted! We are thrilled and so pleased for them both. A date has not yet been fixed for the wedding but it is likely to be in May 2017. Aislinn is now in her final year at King’s College and is applying for a post graduate position. We are looking forward to them celebrating Simon’s birthday and Christmas day in Rochester this year.

Julia is now well into her two-year part-time role as dementia specialist project officer with Rochester Diocese, exploring how Anna Chaplaincy might benefit people with dementia and their families. A publication she edited for Dementia Pathfinders, ‘Approaching an Unthinkable Future: Understanding the Support Needs of People Living with Young Onset Dementia’, was published in September.

Simon has taken on a new role for the Diocese in its link with the Lutheran Church in Estonia, and will be visiting for several days in January 2016. He has been advised to take warm clothing and is looking forward to establishing friendships with Christians in this part of Eastern Europe. A highlight of the year was seeing U2 in concert in October – a birthday present from Helena.

In the wider family, it was wonderful in July to be part of the magical wedding of Kat and Paul, Simon’s niece and her new husband. Julia’s mum joined Simon, Julia, Tim and Aislinn for a trip to Honfleur in October; it has not been an easy year for Yvonne after the death of Julia’s sister Libby in November 2014 and a deterioration in her second hip joint necessitating imminent replacement surgery. Julia’s sister Claire-Lise, her husband Steve and their two children, Izzy and Piran, are now living in Blantyre, Malawi, and have settled well into a very different way of life. Julia and Simon spent an enjoyable few days with Simon’s parents in Fleetwood in early December.

As a new year approaches, we are especially mindful of friends who have endured difficult times in 2015, praying that they will experience strength and comfort in the coming months. We may not see them often, but they are constantly in our thoughts and prayers.

In September she started a degree at Roehampton University in Drama, Theatre and Performance. The course is stimulating and she is enjoying living in Clapham (though not the ridiculous cost of renting a room in London!) She is continuing to work at the Royal Haymarket Theatre where she has met an astonishing array of internationally acclaimed actors, including being photographed with Patrick Stewart and Chris Hemsworth. 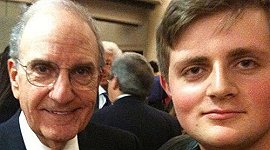 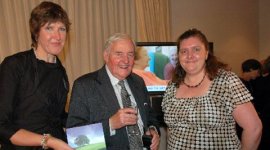 The Good Life: Julia with co-author Rosemary Hurtley
and some bloke they met at the book launch

A highlight of 2011 so far was a weekend spent with the Burton side of the family (24 members in total!) in the West Midlands. It offered a rare chance to be together and to see the children developing their own personalities. The 12 younger members of the family, aged between 1 and 17 years at the time, got on so well together and had lots of fun over the 3 days. Lots of photographs were taken by Tim, who continues to enjoy his camera.