With both our children now in their twenties, we are conscious of how quickly time passes. It is hard to believe we have now been in Rochester almost seven years.

Julia reached her half century on 6 August and spent it in the North East, celebrating the marriage of close friends Ross and Nat. It was wonderful for Simon to catch up with so many old friends from Fleetwood. Tragically, however, just three weeks later we learned of the death of Ben, son of Ross and his former wife Anne, at the age of 28. We share in the heartbreak of the family and Simon felt privileged to be asked to speak at Ben’s funeral. We hope and pray we can be a support in the difficult months to come.

We were thrilled for Tim when he was offered the role of fundraising and communications officer with Church Urban Fund in early 2016. He is enjoying the challenge, though tiring of living in London and looking to move soon. Tim’s fiancée Aislinn finished her degree and will soon finish an internship with a branding agency in Central London. Plans for their wedding on 23 June 2017 are taking shape.

Helena enjoyed her first year at Roehampton University and has continued working at the Royal Haymarket Theatre. She moved with a colleague to a new flat near Ravenscourt Park and is enjoying the new location, though still resents the high cost of renting in London! She is also benefitting from belonging to a nearby yoga gym and this is contributing to the gradual improvement in her health. Her boyfriend, Jamie, has switched university course and has begun a degree in music production at BIMM London.

Julia has found much encouragement in her two-year part-time role as dementia specialist project officer with Rochester Diocese. The Diocese will soon have several Anna Chaplaincy hubs, with Anna Chaplains and Anna Friends working across parishes to address the needs of people with dementia and their families. She and Tim were both at General Synod in York in July, while Simon has still managed to avoid attending! Julia also continues to deliver training on behalf of Dementia Pathfinders, and has been pleased to participate in three Music for Life projects this year.

Simon enjoyed visiting Estonia on behalf of the Diocese in January. 2016 has been an exceptionally busy and at times stressful year in Rochester Archdeaconry and he was glad of the restful fortnight spent with Julia in the Loire region of France in July. We also spent a long weekend in Fleetwood with Simon’s parents over the August bank holiday, with Tim and Helena both able to take time off work. This meant we were able to meet baby Eva Rose, born only days earlier; she is daughter to Simon’s niece Kat and her husband Paul and is utterly adorable. We were all smitten!

Julia’s mum Yvonne had hip replacement surgery in early March, after months of considerable pain and limitation. This thankfully meant she was able to fly out to Malawi for three months in July, to spend time with Julia’s youngest sister, Claire-Lise, and her family. As always, time spent with friends and family has been the highlight of the year so far, and we look forward to several further opportunities to catch up with people over the next few months. Life may be full, but never too full to be with the people that matter to us.

Simon with his mum and dad in Windermere 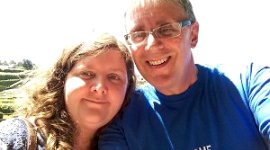